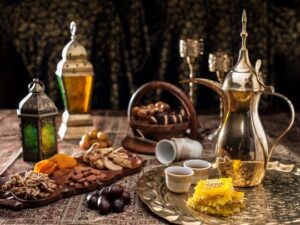 Ramadan, is a time of reflection and piety, marking the lunar period in which the Prophet Muhammad (PBUH) received his first revelations.

Ramadan is one of the five pillars of Islam, the other four are faith (shahadah), prayer (salah), charitable giving (zakat), and the pilgrimage to Makkah (Hajj). For observers, this period is respected by increasing time spent in prayer and with loved ones.

As it is based on the Islamic lunar calendar, the dates of Ramadan vary from year to year, but it is estimated to fall around 12 April to 11 May in 2021. The exact starting day is officially announced when the crescent moon of the ninth month (of the traditional Islamic calendar) rises.

Ramadan lasts for 29 or 30 days, until the next new crescent moon has been sighted – before closing with Eid Al Fitr to break the fast in festive style.

Ramadan is known as the holy month of fasting, with Muslims around the world abstaining from eating and drinking from sunrise to sunset.

The fast is intended to remind Muslims of the suffering of those less fortunate and bring believers closer to God (Allah, in Arabic).

During the month, Muslims also abstain from habits such as smoking, caffeine and gossip; this is seen to both physically and spiritually purify oneself while practicing self-restraint.

Children, travelers, elderly, sickly, pregnant women, and menstruating women are exempt from fasting. In Islam, the preservation of human life is always the most important. If fasting can cause harm, then it is not required.

Here’s what a day of fasting during Ramadan looks like:

Muslims have a predawn meal called the “Suhoor.”

Then, they fast all day until sunset.

At sunset, Muslims break their fast with a sip of water and some dates, the way they believe the Prophet Muhammad broke his fast more than a thousand years ago.

After sunset prayers, they gather at event halls, mosques or at home with family and friends in a large feast called “iftar.”

Toward the end of the month, Muslims celebrate Laylat al-Qadr or “the Night of Power/Destiny” — a day observers believe Allah sent the Angel Gabriel to the Prophet Muhammad to reveal the Quran’s first verses.

On this night, which falls on one of the last 10 nights of Ramadan, Muslims practice intense worship as they pray for answers and seek forgiveness for any sins.

To mark the end of Ramadan, determined by the sighting of the moon on the 29th, a 3-day celebration called Eid al-Fitr brings families and friends together in early morning prayers followed by picnics, feasts and fun.

Let’s wish for all our Muslim colleagues around the world “Ramadan Mubarak”, “Ramadan Kareem”. Enjoy the holy month!